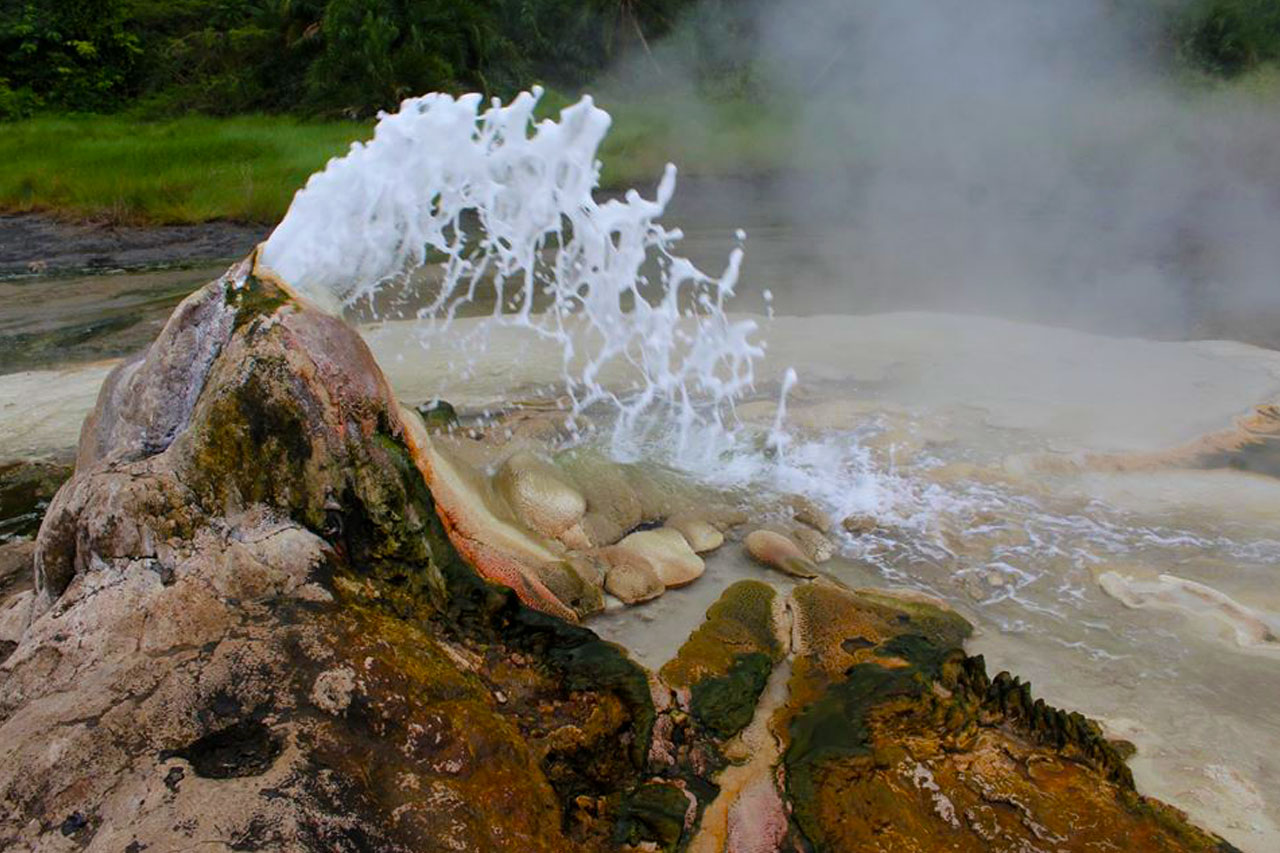 The Sempaya hot springs found in two places and also commonly as the male and female hot springs are located in the Semuliki national park in Ntandi town council in the western district of Bundibugyo approximately about 70km from Fort Portal town. The springs got the name Sempaya from a Kiswahili word “Sehemu mbaya” translating to the difficult side as a result of finding it challenging to penetrate the existing rocks during the construction of the Fort Portal Bundibugyo road along the ridges of the Rwenzori Mountains.

As briefly stated above, the Sempaya hot springs has both the male and female hot spring each with distinctive characteristics. The female hot spring with sparkling waters is the most attractive and commonly visited by a number of travelers worldwide among the two.

The indigenous story about the existence of the Sempaya hot springs
The indigenous Bamaga clan the neighbours to these awesome hot springs and their own story from the folk lore. According to Mzee Adonia Balinsanga the leader of the Bamaga clan, it is said that the Bamaga wowen once went to the forest to get themselves firewood and then saw a hairy man dressed in bark cloth wielding a spear and with accompany of a dog. The women ran back to their homes and narrated everything to their husbands who decided to pick and take him to their homes and later got him a wife from the same village.

The said man was later known as Biteete went on with his hunting activities, but one time never returned home. After 3 days, the men that had brought him went out to look for him and they couldn’t find him nor his dog only to spot his spear at some one point the present day the male hot spring. It was assumed he had disappeared from the same.

The men went back to tell the wife (Nyansimbi) who also ran to the forest never to return. Later also after a continued search for the woman, they only found her clothes at some point the present day the female hot spring.

Formation of the Sempaya hot springs
Scientifically, the hot springs were spirally formed by the appearance of the geothermal heated underground water from the earth’s layer which increases the hotness of the underground rocks. Later on when the waters infiltrates plentifully into the crust, it is heated as it gets into contact with the very hot rocks. Hot springs are made by fissures spreading deep towards the exceptionally hot temperatures of the earth layer and water trickling down is heated and enforced back up with much pressure to produce bubbles.

Accommodation choices in Semuliki national park
The park is gifted with a number of accommodation facilities ranging from budget, midrange and luxury plans. Some of these include; Semuliki safari lodge, Ntoroko game lodge, Crater safari lodge, Buguma campsite, among others.

Getting there
The Sempaya hot springs are sitauted in the Semuliki national park which is found in the western region of Uganda. The park can accessed by road via two routes one being Kampala – Masaka – Mbarara – Fort portal covering a journey of about 465km within 7 to 8 hours’ drive.

The second route is via Kampala – Mubende – Fort portal covering a journey of about 180km for about 5 hours’ drive.
Upon arrival to Fort Portal, embark on your journey for more 2 to 3 hours’ drive on a rough road to get to the amazing Sempaya hot springs while seeing the beautify Rwenzori mountain ranges and other interesting things.

Note: Before getting to Fort Portal town, we recommend using the first route of the fact you can easily switch to other awesome tourist destinations like the Uganda Equator, Lake Mburo national park the whispers of the world and Queen Elizabeth national park a medley of wonders.

The walk to unveil these hot springs can is one of the breath taking activities that one should never miss while on a Uganda safari more so those interested with visiting the Semuliki national park or other parts of western Uganda.