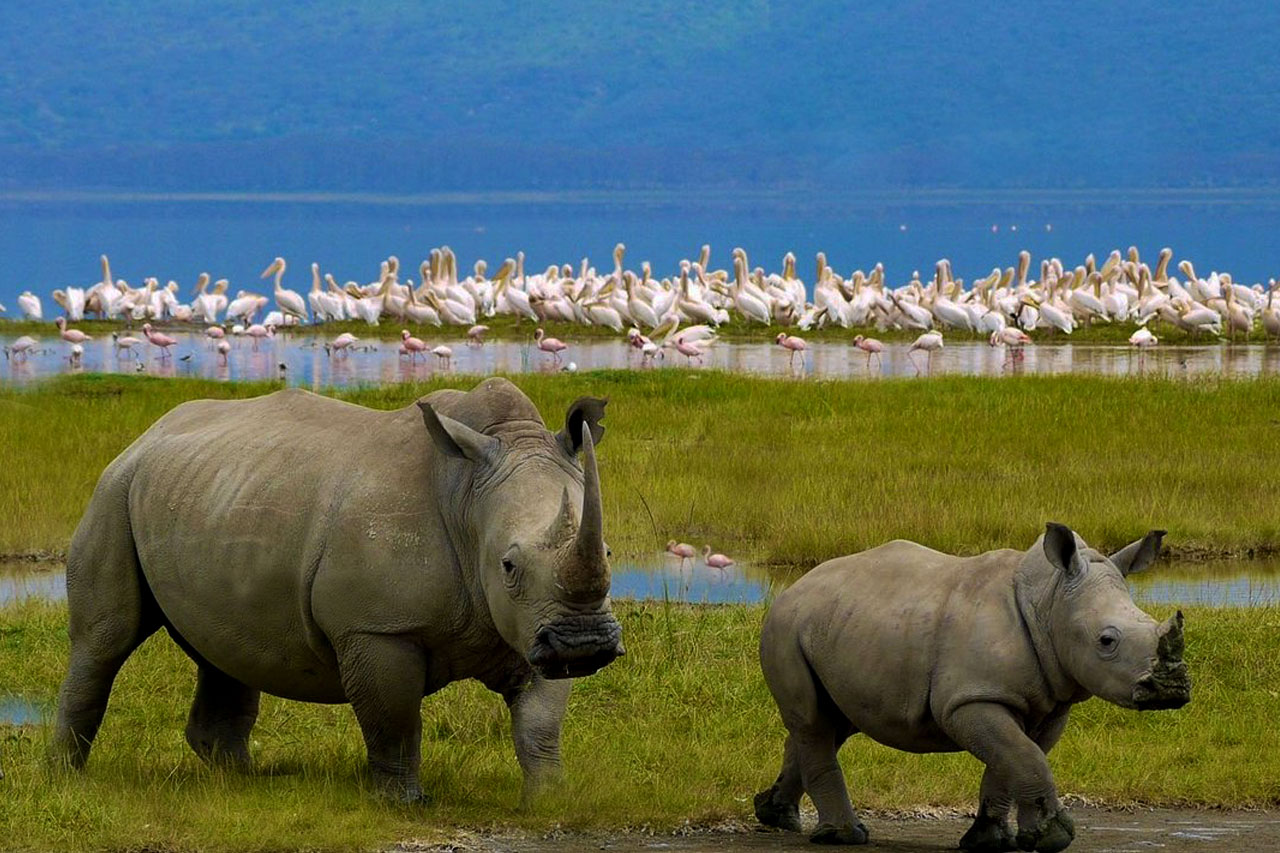 Lake Nakuru national park a haven for Kenya wildlife and birds is situated on the floor of the Great Rift Valley in Nakuru district approximately about 164 kilometres from Nairobi, a two hours’ drive from Nairobi city and seated on a land expanse of 188 square kilometres. The park got its name from Lake Nakuru a soda lake that was later in 1961 established as a national park.

Besides being an ideal destination for birding, hiking, picnic and game viewing, Lake Nakuru national park is also commonly known for its rhinoceros sanctuary, in which 70 white rhinoceros and 25 critically endangered black rhinoceros can be seen. This concentration is one of the largest in Kenya, and makes the park the ideal place to visit if you are eager to see these beautiful creatures in the wild.

Things to do and see in Lake Nakuru national park

Game watching or viewing – A game drive through Lake Nakuru national park spots you to a variety of mammal species which are often seen in the open landscape of the park and some of these include the Rothschild giraffes, rhinoceros, lions, hyena, cheetahs, eastern black, impalas, zebras, waterbucks, hippopotamus, Thompson’s gazelle, among others.

Bird watching – The Park protects Lake Nakuru that is a haven for bird species especially the largest population of flamingos and pelicans in East Africa. Among some other birds to seen in this park includes the kingfishers, cormorants, ostriches, storks, herons, eagles, bee eaters, among others.

Visiting the Makalia falls – Makalia falls in Lake Nakuru national park create a magnificent view as water flows to the group from the hill which is loved by many tourists.

Nature walks – Nature walks in Nakuru national park often take place around the shores of Lake Nakuru where a large population of flamingos are seen, hippopotamus, rhinos and many animals.

Best time to visit Lake Nakuru national park
The park is a great year-round safari destination of the fact that animals never migrate to other place since the park is fenced. But January to March and July to December being dry months are best recommendable since the routes are not muddy. For travelers who couldn’t prefer congestion, the rainy months of late December and January to March could be better of the fact that few tourists do safaris in this period.

Getting to the park
Lake Nakuru national park can be accessed by both road and air means. By Road, you can either use your own vehicle or public means, but we recommend using tour operator based transportation means. The park is 156km northwest of Nairobi to the main gate and 4km from Nakuru town. Besides the main gate, the park can as well be accessed through other gates like the Nderit Gate for travelers from Maasi mara or Elementaita and the Lanet gate for travelers that uses the Nairobi-Nakuru road.

By air, you can use a charted aircraft from Nairobi international airport to Naishi airstrip.