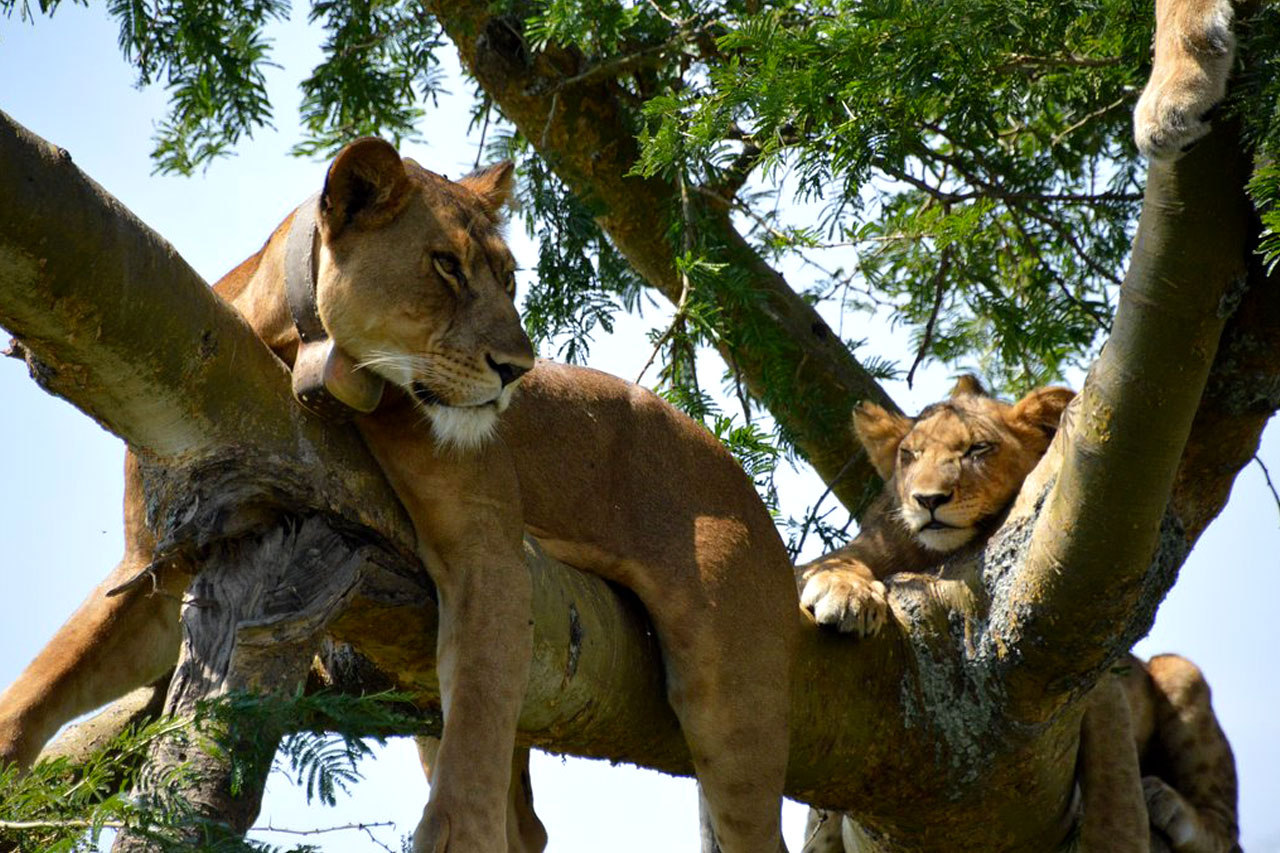 Queen Elizabeth National park is in the Western Region of Uganda, spanning the districts of Kasese, Kamwenge, Rubirizi, and Rukungiri. It borders Lake Edward with Lake George connected by the Kazinga channel, the park prides a diverse ecosystem with savanna, humid forests with series of wildlife featuring the big game which include about 3000 elephants, tree climbing lions, leopards, antelopes, buffalo, 5000 hippopotamus, Ugandan kob as part of the 95 species of mammals.

It is also a habitat to a quarter of the total bird life in Africa more than 600 species of birds, reptiles including crocodiles and Monitor Lizards, volcanic features, including volcanic cones and deep, crater lakes, such as the Katwe craters, from which salt is extracted.

There are many things to engage in at the park which include;
Wildlife Game Drives in Queen Elizabeth prove to be a delight and the best attraction are the felines, where it is home to a number of feline cats that are often spotted on Night Game Drives such as tree-climbing lions, leopards, civet cats, genal, and serval cats where the predators are out on prowl, buffaloes, warthogs, waterbuck, Uganda Kob, Topi Antelopes and even the rare semi-aquatic Sitatunga Antelopes that have webbed toes.

Birding in Queen Elizabeth National Park is an incredible treat as it has a variety of habitats that range from savanna to wetlands to lowland forests. This diversity is reflected in the list of over 619 bird species, the largest amount of any protected area in East Africa. Queen Elizabeth Park is a must for birders who are visiting Uganda.

Boat safari on Kazinga channel to see the water creatures like the hippos, crocodiles, monitor lizards where the hippos have one of the largest concentration in Africa.

Nature Walks and Hiking at the Maramagambo Forest buzzing with nature’s beauty, chimpanzee tracking at the Kyambura Gorge which is a valley that is fascinating and worth a know.

Cultural encounters with different communities like the Nyanz’ibiri Cave Community,leopard village, Kikorongo Women Community who perform dance and music which takes place at lodges around the park, where you can sit back and watch village life unfold in front of you, craft.

For accommodation, there are safari lodges, campsites at the Mweya peninsula and bandas, lodge on a crater lake near the Maramagambo forest.

The park is accessible 438 kms from Kampala